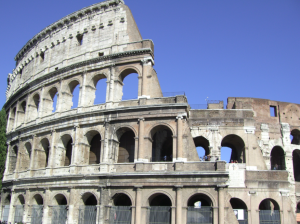 Exploring the sites of Rome with children and teens is fun for the whole family, with exciting sites that captivate imaginations, young and old. A question that I frequently encounter is where are the best places to visit in Rome with children and teenagers. It’s a question that I answer with plenty of enthusiasm, as being an experienced tour guide I know that the whole family will have fun discovering Rome!
One of the greatest hits for kids and teens is the Victor Emanuel II monument, also known as the Tomb of the Unknown Soldier. This memorial was partly created as a tribute to Maria Bergamas and all other mothers who did not know where their missing sons were buried after WW1. Maria’s own son, Antonio Bergamas, deserted the Austrian troops to join the Italian troops, and his grave was sadly lost in time.
In Italy Maria embodies the loss that women faced. The tomb of the Unknown Soldier is mainly a memorial to all of the soldiers that lost their lives during the Ist World War. Do not miss a trip up to the top of the monument for a panoramic view of the city.Your Kids and Teens adventure continues along the Roman forum street, lined by the impressive Imperial and Roman Forums that testify to the glorious past of the city. At the end of the street you will see the Coliseum, the biggest symbol of this city; of course a visit inside is really a must, you don’t come to see Rome without visiting the Coliseum! Near the Coliseum there is the Ludus Magnus, once the arena of the great gladiators.
Along San Giovanni in Laterano Street you will also find St. Clemente Basilica. From inside its underground tunnels the whole family will discover a whole other city. It’s as if you’ve stepped in a time machine; you can walk through streets lined with ancient buildings built in the 4th century and 1st century!If you follow this itinerary you will really experience Rome from its highest peaks, with panoramic views from the Victor Emmanuel II monument, to its very depths with the undergrounds of San Clemente!
Travelling by taxi from the Coliseum, kids, teens and parents can visit Barberini square, where you will find the impressive Palace of the Barberini family, one of whose descendants is Pope Urban the VIII, elected Pope in the 1623. The palace, designed by great masters of the baroque, is standing on the side of the square.
At the beginning of Via Veneto you will see also the symbols of the family in the Honey Bee Fountain, designed by the skilled baroque architect Master Gian Lorenzo Bernini. He also designed the fountain in the center of Barberini square, depicting the god Triton sitting on a large conch shell, blowing on a smaller conch to release the water. If you look closely you can see the symbol of the Barberini family, honey bees, on the tails of the dolphins.The crypts of the Bones are located in the complex of the Capuchin monks. You will see the cemetery with its unique crypts, made with the real human bones of the Capuchins!!!! (As this is a cemetery it is requested that you wear shorts/skirts that reach the knees and keep your shoulders covered).
A pleasant walk along via Veneto is highly recommended! On your way you will find the Hard Rock café of Rome, the Café de Paris, the Harris’ bar, local restaurants, various other cafes and many luxury hotels. At the end of Via Veneto after the Aurelian walls there is the beautiful public park of Villa Borghese. Sitting in or walking around the park is a very calming experience. You can choose to visit the zoo, see the beautiful little lake with its temple of Aesculapius (which was built in the XVIII century), rent a bike or a Segway, or simply just relax in the park.
What a great family experience it will be to discover Rome with your kids and teenagers!

This article was written by Vivianna Maggio of Rome Private Guides, a group of licenced tour guides in the eternal city of Rome and other major cities in Italy.